During this time, a number of blogs will be hosting a book giveaway. You could win a copy, as well as some other cool prizes. Just visit one of the blogs linked below and enter before September 30. Winners will be drawn after that. 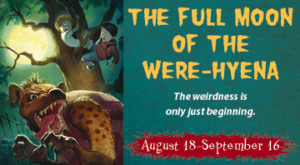 One reason I’m so keen on this book is that I was raised on classic monster tales, like The Wolf-Man, Frankenstein, and The Mummy. My love for these monsters is marrow-deep — I even had a whole shelf of hand-painted monster models when I was a kid. And more, I had my own were-creature in the family.

I recall when I first discovered this. I was about nine years old, sitting with two buddies in my parents’ bedroom and watching The Wolf-Man with Lon Chaney Jr. Poor Lon had been bitten by the werewolf, and his transformation was coming on with the full moon. Things got spookier and spookier — the sign of the pentagram appeared on his palm, the hair began sprouting, and he was just about to change. We were on the edge of the bed, raptly following every development.

Well, unbeknownst to us, my dad had sneaked into my mom’s dressing room. There, he donned her old fur hat and some Halloween monster hands, and at the climactic moment, he burst into the room howling, “Awwroooo!” You never saw three kids clear a room so fast. In fact, you could hear my friend Doug screaming all the way down the block.

That incident stayed with me, so it is with great affection that I offer my own contribution to the trove of were-creature stories. Best of luck with the giveaway, and may the best were-creature win!

AAARROOO!!! Its the The Full Moon of the Were-Hyena Blog Tour and Giveaway!