In the last newsletter, I shared what was going on with me as I finished a project and began to psych myself up for writing the next book. For me, it’s a sometimes-awkward process, filled with stops and starts. I wondered how it was for other writers, and my musing must have struck a nerve. Here are three subscribers’ takes on how they face the blank page…

“Every time I finish a piece — every single time — I worry that I’ll never be able to write another story, essay, poem, whatever, again.  It’s not a big or lasting worry, but it seems I have to go through that before starting another piece.

“After the worry session is over, I just focus on being very open to moments in daily life.  I trust that something will trigger the creative juices again. 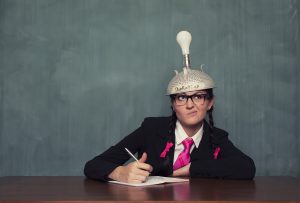 Maybe it’s driving behind a broken down car, which was the inspiration for my latest short story, or standing in line waiting to pick up a prescription.  Something always presents itself.  While I’m waiting for that to happen, I try to observe the every day behavior of strangers and then write up little character sketches based on those observations.”

“I try to think about something before falling asleep if I need an idea, and I have no tips to share that might help, but give it a try. However ensure you have paper, pen or pencil because those ideas flee as a thief in the night.”

“I also give myself some time off. Sometimes, there will be a story that’s been gnawing at me while I worked on the prior project or a character I keep coming back to as I fall asleep at night. Anything begging to be written gets its shot first.

“If I don’t have anything like that, I’ll read over my list of story ideas, which I keep in a Word document. If any of those jump out at me, they’re next. If more than one does, I’ll flesh out ideas. I don’t outline as much as get a sense of the overall concept. Some things fall by the wayside during this process because I lose interest in them or realize the idea isn’t as viable, or good, as I thought. After that, I hope one is begging to be written more loudly than the others.”

2 thoughts on “Where do I get my next story idea?”