It’s no secret that kids love to laugh.  (Adults, too.)  And as a consequence, funny stories always rank high on editors’ “must have” lists. If you possess a knack for writing humor, you’re well on your way to winning editors’ (and readers’) hearts.

But say you’re not the world’s greatest joke writer — in fact, you think of yourself as a serious writer.  Should you still try to inject humor into your story? 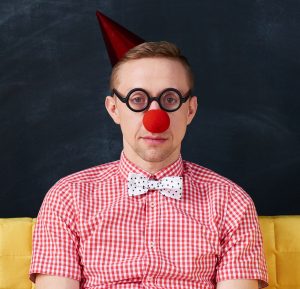 Humor has its place, even in a deadly serious tale.  Why?  Two words: comic relief.  When your story is scary, serious, even downright depressing, your readers are going to need a little break.

After all, readers can only take so much unrelieved heaviness. A moment of laughter gives them a respite before returning to your uplifting tale of teen suicide, drug addiction, and death.  Even bloody tragedies like MACBETHand HAMLEThad some humor here and there.

Yes, Shakespeare knew a thing or two about audiences. He knew that we humans crave variety.  He also understood that a dash of lightheartedness makes the darkness seem that much darker.  As they used to say in Elizabethan England, “That’s contrast, baby.”

But how do you drop humor into a heavy story without making it seem awkward and ruining your tone?  Here are a few ideas:

Rather than employing bad puns, slapstick, or funny jokes, let the humor arise from the contrast and conflict between your character and the world. (Woody Allen’s BULLETS OVER BROADWAY makes extensive use of character-based humor. Heck, even Breaking Bad did.)

In serious stories, humor is most effective in small doses. Use it after a long stretch of sadness or tension.  And make sure your funny bits don’t come tooclose together, unless you’re aiming to write a black comedy.

3. Keep your hero in the dark

If readers find something funny, the main character should take it seriously.  There’s ample humor to be found in that gap, where the readers are in on the joke and the character isn’t.  As Mel Brooks said, “Tragedy is when I cut my finger. Comedy is when you fall into an open sewer and die.”  It’s all a matter of perspective.  Don’t let your hero have any.

You often see this in horror movies and books.  The heroine enters the dark house, where we suspect the monster is hiding.  She walks from room to room.  Tension mounts. Then something leaps out at her from the shadows!  Her cat.  The feeling of relief after the surprise makes us laugh.

Of course, these guidelines also apply to stories that are intentionally comic in tone.  No matter what your tale, surprise and character-based humor will help make readers laugh and editors smile.  And as we say in sunny California, “That’s golden, baby.”

2 thoughts on “4 ways humor can help a serious story”