A timely tale for our pandemic season, City of the Plague God draws on lesser-known Mesopotamian mythology to spin its tale of adventure in New York City. 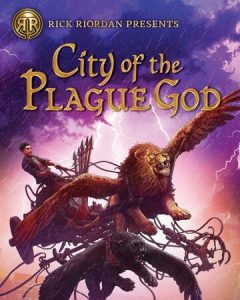 demanding something for their boss, Nergal the Plague God, something they think Sik has. Rampaging through the deli, they infect Sik’s parents with a gruesome disease, turning them into patients zero. Only by the timely intervention of a mysterious girl ninja does Sik manage to escape.

With his parents in the hospital and infection spreading, Sik is taken in by Ishtar, the Goddess of Love and War. Turns out, her adopted daughter Belet is the surly ninja who rescued Sik. The three team up to defeat Nergal’s evil plans. They’re joined by Gilgamesh, now a pacifist vegan baker living in Central Park, and Kasusu, a sarcastic talking sword.

Throughout, the action is peppered with humorous bits and asides, as when Kasusu claims to have been Excalibur. “I thought Excalibur would have been a bit…bigger?” said Sik. Kasusu huffed. “Size isn’t everything.” Sik’s quips throughout help ground the mythological elements and make him seem more like a modern kid.

With help from a clever homeless girl, Sik and Belet locate the container ship Nergal arrived on, only to find that his infection has spread to many more New York residents, turning them into monsters or making them desperately ill. When Sik figures out that Nergal seeks a plant that grants immortality — a plant which Sik’s brother Mo sent back home from Iraq before his death — the race is on to find it before Nergal and his demons can.

In amidst the nonstop action, Chadda deftly weaves in details of Islamic culture: the soup kitchen run by the local imam; the experiences of Iraqi refugees; the way Hollywood typecasts Middle Eastern actors as villains; as well as the deli’s delicious kebabs, hummus and hot sauce. Muslim identity is a central theme here, and Chadda even addresses the dichotomy between Sik’s Muslim faith and the existence of gods and goddesses. (Cleverly labeled “The Thor Conundrum,” as in is Thor a god or a superhero?)

In the end, the story balances heart, action, and humor in a post-apocalyptic setting where teens can rise to a challenge and Muslims turn out to be heroes.

The visit was amazing and a total success from the students’ as well as teachers’ point of view.… END_OF_DOCUMENT_TOKEN_TO_BE_REPLACED

It’s not surprising that the “Bruce Hale” books are now the most requested books in the library.  I… END_OF_DOCUMENT_TOKEN_TO_BE_REPLACED

Bruce…is a very good storyteller. He captivates the audience as soon as he starts his presentation, … END_OF_DOCUMENT_TOKEN_TO_BE_REPLACED

He was an outstanding presenter and inspired our students with his message. If you are considering h… END_OF_DOCUMENT_TOKEN_TO_BE_REPLACED

The [Battle of the Books] kick-off this year was fantastic, thanks to you. We had our best at… END_OF_DOCUMENT_TOKEN_TO_BE_REPLACED

Bruce Hale’s presentation was certainly a highlight of our BIG READ program. He is a delightful, … END_OF_DOCUMENT_TOKEN_TO_BE_REPLACED

Just a quick note to tell you I need hundreds of copies of your books! The kids and teachers are cr… END_OF_DOCUMENT_TOKEN_TO_BE_REPLACED

It was an absolute pleasure to work with you on our Author-In-Residence program. Everyone loved you… END_OF_DOCUMENT_TOKEN_TO_BE_REPLACED

Hearing from a published author about his own process validated the work students are doing. His vis… END_OF_DOCUMENT_TOKEN_TO_BE_REPLACED