Maybe you’ve felt it before? The sinking sensation that you’re a big fat fake, and that very soon, the whole world will find you out? Relax, you’re not alone. Impostor syndrome, a term coined in 1978 by American psychologists Pauline Clance and Suzanne Imes, runs rampant among high achievers and creative people.

This nagging sense that you’re not good enough or don’t deserve your success hits when you feel most vulnerable. (Of course.) It manifests as a tendency to devalue your accomplishments and 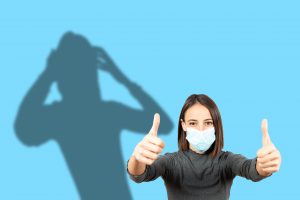 instead attribute them to luck or good timing. Even the most accomplished writer is not immune. After publishing her eleventh book, Maya Angelou said that every time she started another book, she’d think, “Uh-oh, they’re going to find out now. I’ve run a game on everybody.”

It doesn’t matter how well published we are or how much acclaim we’ve received. When we have a skill that comes naturally, we often tend to discount its value. In mild cases of impostor syndrome, it’s no big deal. We recognize the thought, discard it, and move on. In extreme cases, however, this feeling can lead to under-charging for our services or even offering to do the work for free — to say nothing of creating a crippling case of writer’s block.

Because writing is a head game (and because so many of us writers are head cases), when impostor syndrome strikes, it can really mess with your creativity. But fear not. Here are nine ways to face this feeling and survive:

If this nagging feeling is common enough to be upgraded to a syndrome, you just know a lot of people have felt it before you. Personally, I run into it nearly every time I write a new book, and many of my creative friends are uncomfortably familiar with it. Tina Fey once said: “The beauty of the impostor syndrome is you vacillate between extreme egomania and a complete feeling of ‘I’m a fraud! Oh, God, they’re onto me! I’m a fraud!’” Neil Gaiman said, “The first problem of any kind of even limited success is the unshakeable conviction that you are getting away with something, and that any moment now they will discover you.”

Research shows that what you say to yourself can actually change the way you see yourself and boost your confidence. Muhammed Ali knew this. Why else would he keep saying, “I’m the greatest”? You might try saying something like, “I’m a well-respected author. Readers love my work. I’m awesome!” Or whatever feels natural to you. The point is to seed your mind with positive thoughts to counteract the negative.

3. Just power through it.

Subscriber Debbie Vilardi writes, “Remember that you felt this way the last time too, but somehow still finished that piece and like it now. If you’re lucky enough to have an agent and an editor or two who liked your work, use that too. If someone in the know believed in your work, you can do the work. And that brings me back to powering through.”

You like to write, yes? So write a list of ten things that show you’re just as qualified as anyone else at whatever you’re trying to do. Own your accomplishments. To dive into greater depth, list your top three successes and remember how you felt when you achieved them. Reliving those feelings will help rewire your brain.

Hey, if it works for Olympic athletes, why not us writers? Imagine yourself selling that story, hitting the New York Times bestseller list, or landing the perfect agent. Whatever you’re worrying about, do a mental rehearsal (or multiple rehearsals, if your impostor syndrome is a stubborn one) of a positive outcome before you start.

This is why we writers need community. Find a writer friend and talk to them about your feelings of being a fraud. Not only does it feel good to vent, but your friend will probably offer some perspective and gently remind you of the truth. Or if you don’t have a friend handy, write out your doubts in a journal, putting those thoughts and feelings outside yourself, so you can examine them more objectively.

I keep a computer file entitled, “To Read When Feeling Blue.” In it, I’ve saved positive feedback from readers, like the college student who said, “If not for your Chet Gecko books in fifth grade, I would never have gone on to read Of Mice and Men or Merchant of Venice.” This positive reinforcement reminds you of your successes. What would you include in your ‘attaboy’ file?

Jessica Kirkpatrick, a data scientist based in Berkeley, wears a rubber band around her wrist and snaps it every time she has an impostor thought. It’s the Pavlov’s Dog Principle: the action sends feedback to your brain, which eventually stops the thoughts that trigger that action. “Change your thoughts and the brain will follow,” says Kirkpatrick.

Rather than wallowing in the feeling of being an impostor, remind yourself, “It’s not me; it’s just the impostor syndrome talking.” Or “It’s not that I’m bad. It’s just that the first few drafts of ANYTHING are bad.” And if that doesn’t work, give yourself permission to not show your next project to anyone.

In the end, impostor syndrome is just another head game that gets in the way of your work. And if you can use one of these techniques to defeat it, maybe you can use that noggin of yours for doing something useful. Like, for example, writing something truly awesome?