What happens when you take an iconic Disney villain (in this case, Maleficent) and put her in the hands of Holly Black, doyenne of YA fantasy? A delightful tween story that humanizes the villain and puts a new spin on the world of Sleeping Beauty.

In this telling, Princess (now Queen) Aurora grew up in the Moors, raised by her godmother Maleficent and three pixie aunts. She has inherited her father’s throne upon his death, and court life is completely alien to her. To make matters more challenging, Maleficent has crowned her queen of both the fae-controlled Moors and the human country of Perceforest, and mistrust between her fairy and human subjects runs deep. 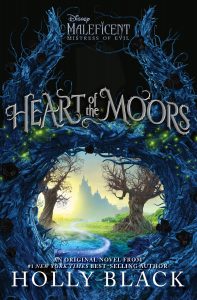 In a nod to the “sleeping” part of the fairytale, young Queen Aurora now has trouble sleeping, fearing that she’s going to be unconscious for a hundred years. Managing the two kingdoms is a challenging job. The fairies and their mischief prove hard to keep in check. And on the human side, royal advisor Lord Ortolan wants to control Aurora and make all her decisions for her, while the duplicitous Count Alain seeks her hand in marriage for his own ends. Neither human is a friend to the fairies — particularly Maleficent, whom they fear and suspect.

Luckily, Aurora has a loyal confidante: Prince Phillip, from the neighboring kingdom of Ulstead. When Prince Phillip decides to declare his love for her, Maleficent threatens him, but even that doesn’t discourage the prince. However, when he tells Aurora, she turns him away, afraid of love’s power.

Aurora decides to invite both humans and fae to a festival, so that they will come to know each other better and sign a treaty forging a new peace. But as the festival approaches, forces conspire to threaten Aurora’s plans.

Throughout, Black tells her tale in lean, yet poetic language, packed with nuggets of wisdom, as in the scene where Maleficent tells Lord Ortolan:

“But if there’s one thing I know it’s that it’s very foolish for the wicked not to be afraid of the good. I for one find goodness very alarming. And unlike you, Sir Ortolan — or me — Aurora is very, very good.”

Part of the fun of the tale is seeing the wicked Maleficent’s softer side, which she denies, and well as her joy in wicked deeds like turning a storyteller into a cat and threatening all and sundry. This story will be a hit with all those who like their fairytales served with a little grit and humor.