With Into the Bloodred Woods, Martha Brockenbrough has crafted a dark and delightful tale that is as much about the power of story itself as it is about the stories of its characters. It opens in fairytale fashion, with a father promising the king that one of his daughters can spin straw into gold. She can’t, of course. Nevertheless, the king says she must spin gold or die.

Desperate to save the girl, her older sister Esme makes an impulsive bargain with the woods: trading her own womb for the power to draw elements from the soil. The swap 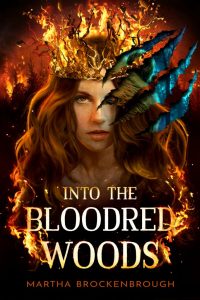 is made, Esme produces the gold the king demands, and the younger sister becomes queen. But all is not happily ever after. Soon, Esme must escape to the forest after the king and queen turn on her.

Childless, she begs the woods for a baby, and eventually one is delivered. As the babe Cappella matures, she becomes a musical girl, one who can play her pipe in harmony with the forest’s mysterious music. Her dearest friend is a wolf cub with secrets of its own. The cub is a werewolf named Hans, and he and his sister Greta (sound familiar?) live in the woods with their father and stepmother, who, before the kids come of age, die of illness, leaving them alone.

Meanwhile, the king and queen have had two children of their own. The oldest, Ursula, is a were-bear, and her younger brother, Albrecht, is bitterly jealous — not only because she has the power to transform, but because, as first-born, she will rule the kingdom. The older he gets, the more twisted and bitter Albrecht becomes, until he sees the were-people of the kingdom as enemies to be subjugated and experimented on. The king and queen die, dividing the kingdom between their children.

In short order, Albrecht borrows a page from modern rulers and trumps up a reason to attack his sister’s half of the kingdom. It doesn’t matter that his reasons are lies; he tells a convincing story. Albrecht’s forces defeat his sister’s farmers and were-animals, and he claims the whole kingdom for himself. Then he kidnaps child were-animals for his own warped experiments. Will his sister counterattack, or will she and her were-animal allies find another path towards wholeness?

Throughout the book, Brockenbrough picks apart and re-weaves the threads of various fairytales — Red Ridinghood, Hansel and Gretel, Rumpelstiltskin — into something both familiar and delightfully new. The story is threaded with sly humor, pointed social commentary, and breathtakingly beautiful language. Highly recommended.

A teacher said, “My students have been very interested in writing books lately. They choose it for b… END_OF_DOCUMENT_TOKEN_TO_BE_REPLACED

Our school enjoyed a great day with Bruce Hale. The students were captured by his storytelling, and … END_OF_DOCUMENT_TOKEN_TO_BE_REPLACED

You were such a pleasure to work with — accommodating, organized, and always available… END_OF_DOCUMENT_TOKEN_TO_BE_REPLACED

Having Bruce Hale come to our school was a delight. His inspiring story provided hope to struggling … END_OF_DOCUMENT_TOKEN_TO_BE_REPLACED

Hearing from a published author about his own process validated the work students are doing. His vis… END_OF_DOCUMENT_TOKEN_TO_BE_REPLACED

Our students have been much more excited about reading since his presentation, and our librar… END_OF_DOCUMENT_TOKEN_TO_BE_REPLACED

Bruce Hale’s presentation was certainly a highlight of our BIG READ program. He is a delightful, … END_OF_DOCUMENT_TOKEN_TO_BE_REPLACED