Sixteen-year-old Princess Shiori has a secret. Forbidden magic runs in her veins, and if it is discovered, she’ll be exiled from Kiata, royal daughter or not. On the morning of her betrothal ceremony, she jumps out a window to avoid what she thinks will be a loveless marriage. Her would-be fiancé, Takkan, leaves in a huff.

Shiori’s magic allows her to animate a paper bird, whom she names Kiki. 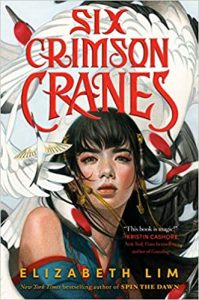 When Kiki informs her that Shiori’s cold stepmother, Raikama, has magic too, Shiori follows her and learns the truth: her stepmother is some kind of snakelike monster disguised as a human.

Reeling from this revelation, Shiori tries to warn her brothers, but their stepmother casts a curse on them all. During daytime, her six brothers will be red-crested cranes. Shiori herself is banished to a distant island, stripped of her magic, and stuck with a wooden bowl over her head, forbidden to speak. If she talks, she loses one brother for every word that crosses her lips.

Penniless, voiceless, and alone (except for Kiki), Shiori begins searching for her brothers, meanwhile doing menial work at an inn to keep body and soul together. There, she meets a friendly sentinel who eventually is revealed to be her fiancé, Takkan, busy hunting for the missing princess Shiori. (True to fairy tale traditions, he doesn’t recognize her.) Finally discovering her brothers’ whereabouts, Shiori is reunited with them for a time, and they search for a way to break Raikama’s curse.

One day in the forest, soldiers of Lord Bushian (Takkan’s father) capture Shiori and take her to their castle. In the process of getting to know Takkan and the people there, she uncovers a plot to seize the throne from her father.

Shiori must work to uncover the true power behind the plot and stop the conspirators before they succeed. To do so, she must trust a shape-shifting dragon, her paper bird, and most of all, the magic she has struggled to accept.

Blending both Western and Eastern fairy tales, Six Crimson Cranes still manages to remain a wholly original work of fantasy. Headstrong and full of heart, Shiori makes for a relatable heroine — going from pampered princess, to tavern worker, to enchantress. Readers will look forward to taking that journey along with her.