All 16-year-old Mateo Matisse wants is to be able to make his music, be heard and not seen, and maybe someday play backup for his musical idol, Gerval. But events in his Brooklyn neighborhood of Little Madrigal don’t make that dream easy. Little Madrigal houses most of the people remaining from the free Caribbean island nation of San Madrigal after it sank into the sea fifteen years ago. Those citizens — pirates, Santeros, and Sefaradim — rule their own little corner of the world, celebrate their traditions, and squabble over politics.

For years, Mateo has been like a tourist in his own community, traveling with his doctor parents and only occasionally touching in with Little Madrigal. But after living for a stretch with his aunt Lucia in Brooklyn, 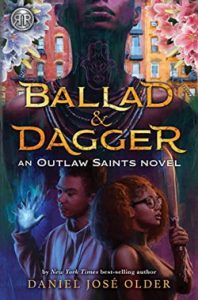 he finds he’s more fundamentally connected to Little Madrigal than he expected — and so is his crush, Chela Hidalgo, the rabbi’s daughter. During a celebration, Mateo learns that he is an initiated child of the god Galanika, destined to channel the spirit’s healing power. Moreover, along with the initiates of the other two island spirits, he’s supposed to help bring back the lost island.

Mateo resists the role that’s been thrust upon him. But unexpected violence and political infighting drag him into the fray. Working together with Chela and his best friend Tams, Mateo uncovers San Madrigal’s buried history, in the process changing his views about their community and his own place in it.

In Ballad and Dagger, Older explores themes of diaspora and colonialism, while still keeping things grounded in a teen reality of evolving identities, crushes, and insecurities. This is world-building at its best, making for a fun, myth-based urban fantasy with a kick. Can’t wait for the sequel!

The kids had a wonderful time and truly enjoyed hearing about the writing process. Many families have shared that their child is STILL talking about your visit.

Bruce…is a very good storyteller. He captivates the audience as soon as he starts his presentation, whether it’s kindergarteners or junior high students.

Our students and teachers can’t stop raving about your visit! It was engaging, entertaining, and highly informative, but most of all inspiring, as many of our students now want to become authors!

It’s not surprising that the “Bruce Hale” books are now the most requested books in the library.  If you want your students to get excited about reading, check out Bruce Hale!

Our circulation department informed us yesterday that they received a lot of new customers over the weekend because of you!!!  You have really made an impact, and we are so grateful to you for sharing your inspiration with these kids!

We second graders loved, loved, loved Bruce Hale’s presentation. From laughing at Chet Gecko’s punny adventures to being inspired by Bruce’s own stories, we left this presentation filled with the possibilities of the imagination!

Hearing from a published author about his own process validated the work students are doing. His visit brought together the key elements we hope to accentuate during Book Week — a love of reading, a love of writing, and a celebration of the stories that connect us.

Bruce is very easy to work with and has a wonderful personality for school visits. He is a great storyteller and easily holds the children’s attention. After the Author’s Faire, a special day student connected with him enough to go back to her room and reproduce all of his artwork, a gifted fifth grader spent the afternoon playing with language, and all over our neighborhood, children spent the weekend reading Bruce’s books.

Bruce Hale is a delight to host. He is flexible, kind and professional. I highly recommend him for library presentations.