Set in Venice, California, this wildly imaginative tale draws on classic orphan tropes while carving its own fantastical path. 12-year-old orphan Maddy Adriana has always known that magic is real. All her life in group homes, she has always seen things no one else sees. And then there’s the matter of the bracelet she’s worn since she was a baby — which grows with her so it always fits. Maddy herself doesn’t seem to fit, and like all orphans, she longs to know her parents.

One day, when Maddy is being transferred to a new group home in Venice, she feels a tug on her 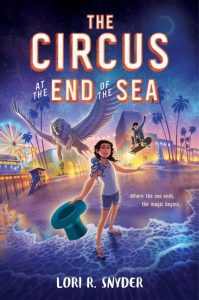 heart. Time freezes. Stepping out of the county bus into a magical Venice, she abandons the bus and finds herself drawn to a drum circle on Venice boardwalk, which leads to Il Circo delle Strade, the magical street circus lurking within the canals, boardwalk, and beaches of this funky California town.

When Maddy encounters the circus folk, she feels inexplicably at home, and that feeling only intensifies when she meets and befriends Ophelia the mimic octopus and Skeeter Chen, the Fastest Boy on Wheels. For once in her lifetime experiencing a sense of belonging, Maddy decides to help the circus, which has been in limbo since its Ringmaster disappeared. With the aid of the Muse Vanessa (a street mural come to life), her octopus pal, and Skeeter, she sets off to find the missing Ringmaster and restore the circus to its former glory.

Filled with loving nods to Venice Beach (like the Ballerina Clown, boardwalk freaks, and wild street murals), Lori Snyder’s tale packs a lot of truth into its fantasy world. Young readers will be sure to fall under its spell.