THE COURT OF MIRACLES

Victor Hugo’s Les Miserables has proven an enduring touchstone, inspiring everything from a stage musical (remember Les Miz?) to numerous movie versions. Court of Miracles puts its own fresh spin on this durable tale by setting it in an alternate Paris where the wretched poor have formed themselves into guilds of thieves, assassins, flesh peddlers and so forth to survive.

The tale unfolds from Eponine’s (Nina’s) point of view. A daughter of the corrupt innkeeper Thenardier, Nina is shocked when their father sells his oldest daughter, 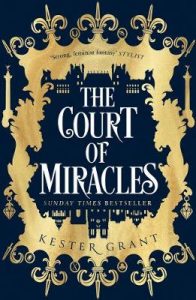 Azelma, to Lord Kaplan the Tiger, who rules the Guild of Flesh. To save Nina from the same fate, Azelma sends her off to join the Guild of Thieves. But it’s not as easy as just filling out a membership card. First, 10-year-old Nina must steal a crown jewel from around the neck of the royal Dauphin.

After succeeding in her quest and joining the guild, Nina is frustrated in her attempts to free her sister from a life of prostitution. Years pass, but she never gives up on her sister. When Thenardier becomes ward to the lovely young Cosette (nicknamed Ettie), Nina tries to use her to trade for Azelma, but at the last minute can’t go against her conscience. She must find Ettie protection from the powerful Tiger, but the Ghost Lord, the only guild lord who would stand against him, has been thrown into the Chatelet prison.

Nina must rescue the Ghost Lord in a daring prison break, and along the way she also frees a master of the Guild of Letters, one Valjean. (Sound familiar?) Guild machinations and Nina’s desperate attempts to save those she holds dear play out against the doomed student revolt from the original story. Along the way, we meet Inspector Javert (here, a woman spurned by Valjean), the Dauphin, and the heartless nobility of Paris.

Paris itself is a character in the story, from the gilded rooms of the Tuileries to the catacombs of bones and the foul cesspit of the Chatelet. “I don’t need to look up at the street signs to know where we are,” says Nina at one point. “I can tell by taste, by touch. I wear this city on the soles of my feet.”

Nina proves an engaging protagonist, gritty, resourceful, and full of heart. And her sharp humor provides welcome relief to the misery. When she and Cosette end up in the palace, all cleaned up and fed as part of a “help the poor” gesture by royalty, Ettie says, “Isn’t it delightful to be so clean?” Nina thinks, “I frown. Since I smell like I’ve been attacked by a lavender rosebush, I refuse to agree.”

Readers will follow every twist and turn of this engaging spin on Les Miserables to the very end — and enjoy many surprises along the way. Recommended.