YA fiction
By Gaby Triana

You might not associate gothic horror with sunny Florida, but that only means you haven’t yet read Gaby Triana’s Moon Child. In a tale of steadily growing dread that draws on both the haunted-house vibes of The Shining and the witchy teen coven of The Craft, this book blends teen angst with terror in a masterful way. 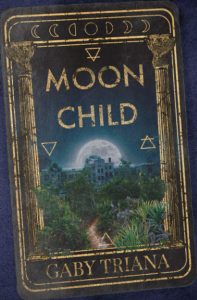 17-year-old Cuban-American Valentina (Vale) Callejas was raised to be a good-girl Catholic and always follow the rules. But she finds herself increasingly disillusioned with the church and drawn to a different kind of spirituality, one marked by witches, the Tarot, and mysticism. When she walks out on church camp, Vale lands in a huge argument with her mother and proper grandmother. Feeling hurt and misunderstood, she drives north to Yeehaw Springs to spend cooling-off time with Macy, the half-sister she’s never met.

Once there, Vale takes a nighttime walk following a mysterious wolf and winds up at an abandoned resort. Sunlake Springs is a creepy old wreck of a place, but there she meets four “clairs,” young psychics drawn to the hotel’s haunted past. Vale’s own psychic powers manifest in an ability to touch objects or people and “see things.” Squatting in the old resort with the clairs, Vale feels her powers growing. Things take a darker turn as the resort’s horrific history emerges in psychic flashes, and Vale discovers that the place has a grim connection to her own family.

Driven to find the truth, Vale persists, and together with the clairs, she opens a portal to the spirit world. But will it bring spiritual wisdom or unleash an evil presence into the world? Readers will tag along for every pulse-pounding plot turn, as Vale discovers what kind of witch she was meant to be. Highly recommended.