You’ve petted your dog, you’ve walked your dog, but have you ever been inspired by your dog? I have.

My newest book, Switched, is particularly close to my heart because it was inspired by my late dog, Riley. One morning when she was young, we went walking in a canyon and I let her go off-leash. Riley promptly disappeared into a thick stand of bushes and wouldn’t return, no matter how I called. The bushes were too thick for a human to penetrate, so while I waited, I wondered what she was getting into. Some moldy avocados? Raccoon poop? The rotting remains of some poor animal? If you’re a dog owner, you know the drill. 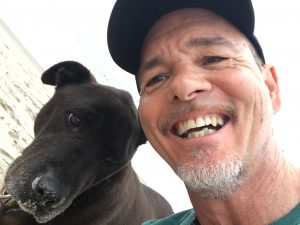 Of course, my imagination ran wild, and soon I thought, “What’s the weirdest thing she could find? Ooh, what if she found a puddle of dragon’s blood, which everyone knows has magical powers? If she drank it, would Riley be able to talk? What would she say?” By the end of the walk (yes, Riley finally reemerged), I was starting to mull over a Boy-and-his-Dog fantasy tale. Simple and fun, right? But it wasn’t as simple as I thought.

For a couple of months I tried plotting a high-fantasy tale, but as the weeks passed, something clearly wasn’t working. The story wasn’t coming together and worst of all, it wasn’t fun. One day, while reviewing my brainstorming notes in despair, I noticed one particular plot point I’d devised — the boy and dog fall under a curse that causes their souls to switch bodies. Now that sounded like fun.

Jettisoning my grand fantasy tale, I started over from square one. First, I decided to set the story in our world. And second, I asked myself, “What kind of kid would most need to switch places with a dog?” In fairly short order, I decided that Boy and Dog would be opposites — the dog would be totally undisciplined, and the boy a bit of a neat freak, like Niles on the old Frasier TV show. After chatting with a college friend who’d gone into psychology, I took his advice and gave my main character, Parker, an emotional wound that was driving his behavior. Parker had lost his beloved grandma. To deal with that (or avoid the grief), he was trying to control his environment by cleaning obsessively.

But what magical object or creature could cause their souls to switch bodies? For a while, I thought it might be a mischievous pixie or fairy, but that didn’t quite fit with the tone of my new story. After being fortunate enough to visit an international school in Nigeria, I had an inspiration. What if the boy and dog were fighting over a statue of the Yoruba trickster god, Eshu? And what if that statue had been the boy’s last gift from his beloved grandma?

Once those elements were in place, the story began to flow. Of course, it still had some rough patches by the time I reached my second draft, but I ran the story by two dear author friends (Lee Wardlaw and Gaby Triana), and they each provided invaluable ideas on how to improve it. By the way, I can’t recommend beta readers highly enough — particularly when you’re writing something you haven’t tried before. Thanks to their help and plenty of hard work, the story improved, Scholastic bought it, and the book was on its way.

And now today, my book is finally coming into the world. Even after more than sixty books, it’s such a rewarding feeling. I only wish Riley could’ve been around to appreciate Switched (or at least chew on it).

6 thoughts on “How a dog gave me a book”