Alexandra Bracken’s LORE boasts a killer premise. Every seven years, as punishment for an ancient rebellion, nine Greek gods are forced to walk the earth as mortals, hunted by the descendants of Greek heroes. The seven days of hunting is known as the Agon, and whoever kills a god will seize their divine power and immortality — at least until the next Agon begins, and they in turn are hunted. 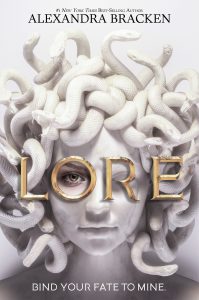 Long ago, Lore Perseous turned her back on the Agon. This teenage girl is the last of her line, her family having been murdered by a rival faction. She hides out in New York City, wanting nothing to do with the world of gods and heroes, although she does keep her warrior skills sharp in underground fight clubs. But as the next hunt dawns over the city, her past comes to find her.

First, a long-lost childhood friend named Castor, shows up at the fight club to warn her that Wrath is looking for her. Wrath, the hunter who killed the god Ares and assumed his powers, may have been the one who ordered her parents killed. Lore rejects Castor’s help, only to return home and find the wounded goddess Athena on her doorstep.

Athena tells Lore that Wrath is seeking the Aegis, or shield of Zeus. It contains a new version of the origin poem that established the Agon, and if Wrath finds it, he will learn how to kill the other gods and claim ultimate power for himself. Binding herself to Athena, Lore sets out to find the poem before Wrath can.

LORE delights in backstabbing gods and heroes full of hubris. But above all, this book is a love letter to the New York City that Lore calls her home. In passages like the following, the reader can sense Bracken’s own love for the Big Apple:

“Even when the streets were empty save for a handful of early morning cabs, she knew they still had a pulse. That there was water rushing through the pipes below. That trains were pulling their empty cars from station to station. Buried power lines hummed a song that only the cement could hear.”

The novel’s premise is a strong one, and Bracken does a terrific job populating her tale with Lore’s friends, enemies, and temporary allies, often dipping into past wounds that influence the present. The writing is occasionally choppy, as in the in medias res opening, but the storytelling is strong enough to carry the reader through. Lore is a resourceful, though flawed, protagonist, and the reader roots for her to succeed.

Recommended for any fans of Greek myths and female-driven action movies.