I have written a picture book story about French Fries called Petrifies! It’s an action packed rescue story. I’ve been told it should be a graphic novel more than once, but have no idea where to go from here. I am not an artist.

As an initial step toward determining whether your story would make a good graphic novel (or even a picture book rendered in comic book style), first read a bunch of these books targeted at younger readers. Notice the simplicity of language, and how much of the story is told in dialogue, versus 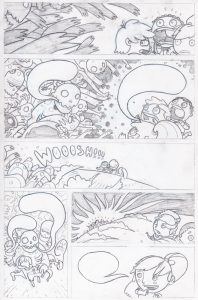 narration. Notice also how the tale is told visually, and how many pages the usual graphic novel for beginning readers runs.

Not an illustrator? No problem. You don’t need to be an artist to plan out the drawings, but you must do so, even with stick figures, to see how your tale would break down into a sequence of images. Having enough illustratable scenes is key — and I don’t mean scenes of two people chatting. Talking Heads was a great band, but talking heads don’t cut it in the world of graphic novels.

If after doing all this, you feel that the graphic novel route is for you, just follow a simple writing format that lets the editor (and illustrator) easily picture the action. Some writers break it down into panels per page. Others just write dialogue and occasional comics-type narration lines, and leave the panel breakdown to the illustrator. It’s up to you. For what it’s worth, here’s the format I use…

FARMER J: What’s that you say, girl? You’d like to learn to breakdance? Well, yee-haw, yo!

[ART: Farmer J turns on his boom box, and he and the cow begin dancing.]

Above all, have fun with it! Comics and graphic novels are very popular with kids, and if you have fun, they will too.

2 thoughts on “How do you write a graphic novel if you’re not artistic?”